What is a Union? 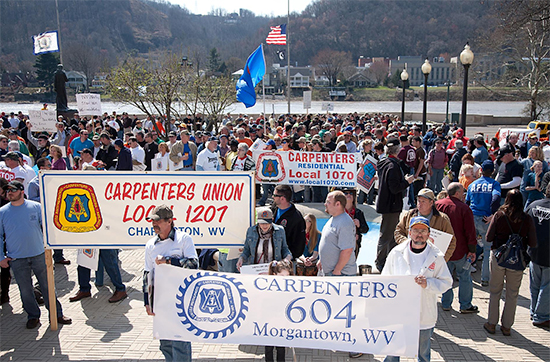 A union is a group of workers who form an organization to gain:

How do people form a union?
When workers decide they want to come together to improve their jobs, they work with a union to help them form their own local chapter. Once a majority of workers shows they want a union, sometimes employers honor the workers’ choice. Often, the workers must ask the government to hold an election. If the workers win their union, they negotiate a contract with the employer that spells out each party’s rights and responsibilities in the workplace.

Does the law protect workers joining unions?
It’s supposed to—but too often it doesn’t. Under the law, employers are not allowed to discriminate against or fire workers for choosing to join a union. For example, it’s illegal for employers to threaten to shut down their businesses or to fire employees or take away benefits if workers form a union. However, employers routinely violate these laws, and the penalties are weak or nonexistent.

What kinds of workers are forming unions today?
A wider range of people than ever before are joining unions—doctors and nurses, poultry workers and graduate employees, home health care aides and wireless communications workers, auto parts workers and engineers, to name a few.

How do unions help working families today?
Through unions, workers win better wages, benefits and a voice on the job—and good union jobs mean stronger communities. Union workers earn 30 percent more than nonunion workers and are more likely to receive health care and pension benefits than those without a union. In 2007, median weekly earnings for full-time union wage and salary workers were $863, compared with $663 for their nonunion counterparts. Unions lead the fight today for better lives for working people, such as through expanded family and medical leave, improved safety and health protections and fair-trade agreements that lift the standard of living for workers all over the world.

What have unions accomplished for all workers?
Unions have made life better for all working Americans by helping to pass laws ending child labor, establishing the eight-hour day, protecting workers’ safety and health and helping create Social Security, unemployment insurance and the minimum wage, for example. Unions are continuing the fight today to improve life for all working families in America.

What challenges do workers face today when they want to form unions?
Today, thousands of workers want to join unions. The wisest employers understand that when workers form unions, their companies also benefit. But most employers fight workers’ efforts to come together by intimidating, harassing and threatening them. In response, workers are reaching out to their communities for help exercising their freedom to improve their lives.

For additional information on how to form a union and be treated with the fairness and respect that every hardworking human being deserves contact the at This email address is being protected from spambots. You need JavaScript enabled to view it.or call 304-344-3557.