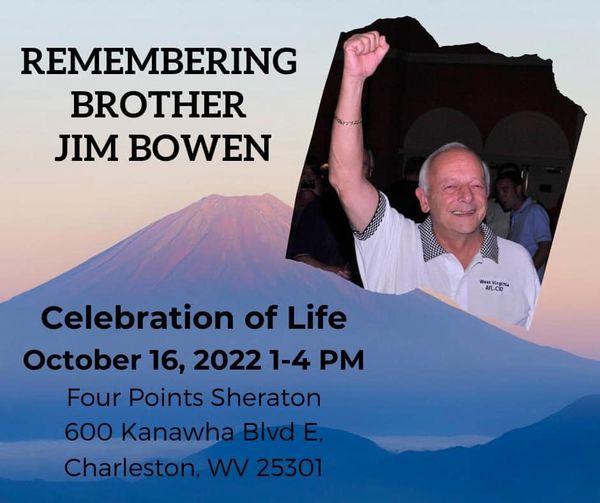 Members of the media are invited to attend the Celebration of Life ceremony for former West Virginia AFL-CIO President Jim Bowen, who dedicated his life and career to the betterment of working men and women across the state of West Virginia.

The celebration, which will include tributes from a host of labor leaders from throughout the state, will takeplace from 1 p.m. to 4 p.m. Sunday, Oct. 16, at Four Points Sheraton, 600 Kanawha Blvd. E., Charleston.

A statement from Mike Caputo regarding the passing of Jim Bowen

“The world is a better place because of Jim Bowen’s efforts for working people across West Virginia and theentire United States,” Caputo said. “Every day, whether it was on the picket lines at the steel mills and coal mines or in the halls of the Capitol, if it was your fight, it was Jim’s fight. He always put himself before others, and led by example.

“Jim’s passing leaves a tremendous hole in our hearts, and I will dearly miss his friendship, but he will continue to inspire all of us in the labor movement here in West Virginia and beyond to fight even harder to give working families a better way of life. He would expect no less.”

Former West Virginia AFL-CIO President Jim Bowen, who dedicated his life and career to the betterment of working men and women across the state of West Virginia and the entire country, passed away today at the age of 87.

“I struggle to put into words how important Jim Bowen has been to the labor movement here in West Virginia,”said WV AFL-CIO President Josh Sword. “He was a mentor to me and so many others who strive to help workers secure good paying, safe jobs and have a powerful voice in the workplace.”

This Labor Day weekend, celebrate the momentum of working people

This Labor Day weekend is a great opportunity to take a break, relax, and reflect on the accomplishments of working people across the country. But within the labor movement, the break will be brief, because worker organizing across the United States is rapidly building momentum, and support of unions continues to rise.

“This week, the national Gallup Poll showed approval of unions in our country has risen to 71 percent, the highest it’s been in nearly 60 years and a full 10 percentage points higher than it was just five years ago,” West Virginia AFL-CIO President Josh Sword said. “Workers in all fields are fed up with decades low wages, unsafe workplaces, unaffordable health care, and a lack of respect and dignity on the job.

“More and more, working people are realizing that when they have the freedom to join together to negotiate a fair return for their work, they win the power and voice they need to level the playing field.”

The following is a statement from West Virginia AFL-CIO President Josh Sword regarding the Inflation Reduction Act of 2022, the result of months of negotiations led by Senator Joe Manchin and Majority Leader Chuck Schumer.

“This compromise legislation offers serious and significant help for our country’s working families, who aretruly struggling right now. Here in West Virginia, where downturns in the economy hit hardest, particularly in our distressed coalfield communities, this legislation could very well be a game changer. I see many benefits for West Virginians on the horizon as a result of this bill, including the creation of good union jobs, reductions in health care and prescription drug costs, preservation of the Black Lung Disability Trust Fund, and tax reform that will finally force billionaire corporations to start paying some of their fair share and will boost our country’s economy.