“Our local food pantries are seeing even more need this year than last,” says Elaine Harris, UFO chairperson. “We are determined to help them fight hunger in our community.”

The 2017 food distribution program, which runs through April 1, is the 35th in a row for the group. The all-volunteer charity does not distribute food directly to the public but purchases food in bulk that supplies 12 independent food pantries across Kanawha and Putnam counties.

United Food Operation, Inc.(UFO) celebrates its 35th year of community service with a special kickoff event on Friday, Jan. 13 at 11:00 AM. UFO is an all-volunteer organization that purchases and distributes food to 12 participating community food pantries each winter season. The group serves Kanawha and Putnam counties.

The event will recognize the growth of food insecurity in our region and role that local food pantries and the United Food Operation play in fighting hunger.

This year’s food distribution program will run from Jan. 13 through April 1. For additional background information on United Food Operation please visit the program website at unitedfoodoperation.org.

West Virginia AFL-CIO Secretary-Treasurer Josh Sword has been appointed to fill the unexpired term of President Kenny Perdue, who is retiring at the end of this year.

Noting Sword’s extensive experience in the West Virginia labor movement and his dedicated service with the West Virginia AFL-CIO, the organization’s Executive Board decided in a unanimous vote Tuesday that Sword should take the helm, and that Joe Carter, a member of the Executive Board and longtime United Mine Workers of America leader, will serve as interim Secretary-Treasurer.

The WV AFL-CIO Executive Board includes 14 vice presidents that represent 575 local unions and 140,000 active and retired members of the AFL-CIO. The current presidential term expires in October 2017, when the WV AFL-CIO will hold its constitutional convention.

After more than four decades of working in the labor movement and nearly 20 years with the West Virginia AFL-CIO, President Kenny Perdue plans to retire at the end of this year.

“While I look forward to spending more time with my wife and family (which includes eight grandchildren and three great-grandchildren), this decision didn’t come easily,” Perdue said. “Throughout my years of service, I have been inspired by the work ethic, integrity and kindness of working West Virginians, who ask for no more than the fair wages, quality benefits and safe workplaces they deserve.”

Prior to taking office as President of the West Virginia AFL-CIO in 2004, Perdue was Secretary-Treasurer of the organization for seven years, and served as Vice President of the WV AFL-CIO from 1989 to 1997. During his career as a sheet metal worker, Perdue was elected business representative for the Sheet Metal Workers Local Union #33, as was his father and one of his brothers. In addition, two other brothers, three nephews, a son-in-law and a grandson are also part of the sheet metal worker trade.

“It has been a true pleasure advocating for West Virginia working families and representing our union partners,” Perdue said. “I look forward to assisting as the West Virginia AFL-CIO and the labor movement across our country continues this critical work.” 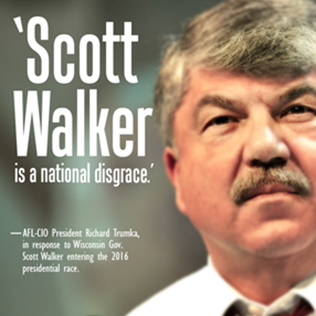 Scott Walker has built his political career on attacking unions. In Wisconsin, he pushed through Right to Work, among many other initiatives intended to lower wages and benefit big corporations, and now he’s coming here to help Bill Cole and his legislative allies this election.

What:   Protest of Bill Cole and Scott Walker

Where: Corner of Capitol and Virginia Streets, Charleston