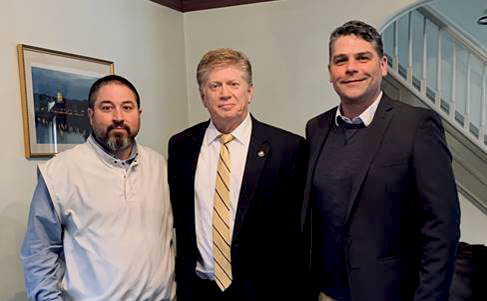 Members of the West Virginia Coalition of Retired Public Employees (CORPE) will gather at the state Capitol for a breakfast on Thursday, January 30, to remind legislators of the thousands of retired public employees who are struggling to get by.

“Retirees who are part of the Public Employee and Teachers retirement systems are dealing with undue hardships and will meet with Legislators to express concerns about stagnate pensions, and lack of tax exemptions afforded other Public Employees,” CORPE spokesman Ernest “Spud” Terry said. “West Virginia’s public retirees have been neglected for far too long.”

Charleston – Today, representatives of the International Union Painters and Allied Trades District Council 53 joined elected officials, water utilities, community leaders, educators, and businesses representatives at the state Capitol as part of the 5th annual Imagine a Day Without Water, a nationwide day of education and advocacy about the value of water. Led by the Value of Water Campaign, 1,000 organizations across the country work to raise awareness about not taking water for granted and the crucial need for investment in our nation’s water systems.

“An investment in our drinking water and wastewater systems is essential to our national health, safety, environment, and economic prosperity,” said IUPAT Business Manager Dan Poling. “Clean water is life itself.”

In recognition of “Imagine a Day Without Water,” IUPAT held a press conference at the West Virginia State Capitol with representatives of agencies in the water and wastewater industry, along with legislators, including Kanawha Senators Glenn Jeffries and Corey Palumbo.